Pickles, the marshall, and the beach! 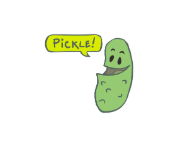 Well, it looks like Doug Marshall is finding himself in quite a pickle.  The Indiana State Board of Accounts has levied the charge of “double-dipping”.  Apparently, there is a law on the books which states you can’t hold a position of an elected official and a paid government position at the same time.  Doug is contending the Muncie Sanitation District is not a city position.    He has said he will resign from MSD.  Either way, it’s a pickle.  If he stays with MSD the salary and benefits would remain intact.  However, if Republicans take control of the Mayor’s office he may lose that position.  (Disclaimer: just surmising, not positive if it would be legal to dismiss him.)

He currently has a challenger for District 1 and that would be Ralph “Jigger” Smith.

If Smith beats Marshall in November, then Marshall would be out.  Doug has said he will resign from the MSD and continue as Muncie City Council representative.  It’s a gamble either way.  Certainly wouldn’t want to be in that pickle jar.   Feeling some sympathy for Doug.

Councilman will have to choose jobs

Moving on.  Here’s a sweet pickle.  Sarah Beach is running At-Large.  The funny thing is she is employed as the City of Muncie Human Resource Director and moonlighting as the spokesperson for Dennis Tyler, uh, City of Muncie.

Clearly, she won’t be able to hold both positions.  The 214 Democrat Party didn’t know about the law?   Yea, they did.  You see, if there is a Republican mayor, she is out.  Possibly,  out if a Dem makes it in.  The Democrat party headed up by the silent majority of Dennis Tyler and Phil Nichols need their people.  They need someone who will do their bidding and take the fall, too.  She votes the wrong way, Beach will be summoned to the interrogation room at Dem Headquarters.

A document filed by federal prosecutors in the Craig Nichols case reported that members of Tyler’s administration had been summoned to Democratic Headquarters in early 2016 to discuss – in groups that included the mayor and Phil Nichols – a response to allegations against the building commissioner. That document did not specify Stewart had attended those meetings.

Beach may be a plant, too.  She’s at the beginning of the alphabet.  Sure to gain at least 7% of the vote (statistically speaking).   Some voters just vote for the first person on the ballot.  No matter what, she’ll be governed by the hidden and quiet previous Democrat officials. Just because of Mayor Tyler saying he won’t run again doesn’t mean he is going away.

This is about as much political commentary we can provide today.  Hope you enjoyed the humor.

And remember, a pickle a day keeps the State Board of Accounts away…